HR software provider Ciphr polled 1,005 workers on their attitudes towards the gender pay gap in the UK.

While many people may have heard of the gender pay gap, few seem sure on the details – or what the current pay gap figures may look like. Around one in six survey respondents (16%) did get close but only one in 20 (5%) correctly identified the UK’s gender pay gap as 15% or 16%. According to the Office for National Statistics’ 2020 figures, based on median gross hourly earnings for all workers, it is 15.5%. A third of people (33%) thought it was as high as over 50%.

In 2020, the UK’s Office for National Statistics (ONS) estimated that the gender pay gap (based on median gross hourly earnings) for all workers was 15.5% in favour of men. Ten years ago, it was 20.2%. As a percentage, what do you think the gender pay gap will be in 2021?

Thinking about the company / organisation you work for, does it have an even mix of men and women, more men than women, or more women than men?

The majority of people (44%) say that they work for an organisation that has a gender-balanced workforce.

Nearly two-fifths of men (39%), compared to one-fifth of women (21%), say they work in an organisation with more men than women. Those results are flipped for places of work that have more women than men (33% of women, compared to 20% of men).

According to the results, people working in health and social care (61%) are the most likely to say there are more women than men at their organisations.

People working in transportation and warehousing (68%), real estate (54%), manufacturing (50%), education (50%), and construction (49%) are more likely to report working at an organisation with more men than women. 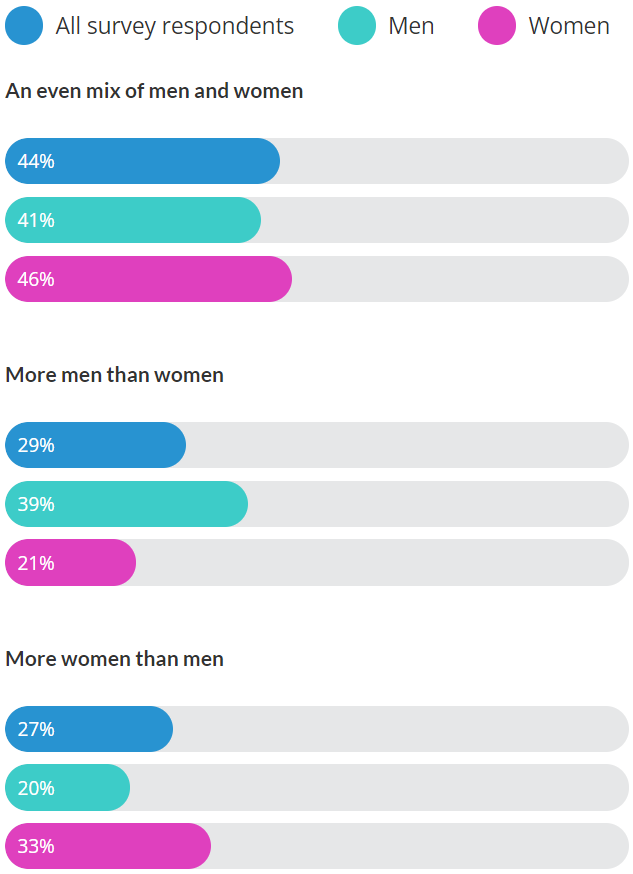 Do you think there is a gender pay gap in the company / organisation you work for?

Looking at the data of the 5,959 employers who have published their gender pay gap figures for the 2020-21 reporting year so far (by midday on 27 September 2021), four out of every five organisations pay men more. Only one in eight (12%) pays women more, and only one in 13 organisations (7.5%) reports having no pay gap. The average median hourly pay gap, which these calculations are based on, is 13%.

The results from Ciphr’s survey however suggests that people’s perception of their own organisation is significantly different. Only a third of respondents (36%) think that their employer has a gender pay gap in favour of men, most people (60% of women and 52% of men) perceive no pay gap at the organisation that they work for at all.

Notably, it’s non-management staff (64% of survey respondents) who are among the most likely to say that their employer has no pay gap (61%), not their bosses. Over half of people (52%) occupying senior management positions, such as owners, CEOs, CFOs, C-level executives, and HR managers, who would perhaps be best placed to know this information – report that their organisation does have a gender pay gap (45% in favour of men and 7% in favour of women).

The size of an organisation doesn’t seem to vastly affect the results, however, its location might. Over two-fifths of the people living in the South East (44%), North West (43%), and London (42%) thinks their employer pays men more. And, one in ten people in London (12%), Scotland (11%) and the West Midlands (10%) think women get paid more at the organisation they work for. 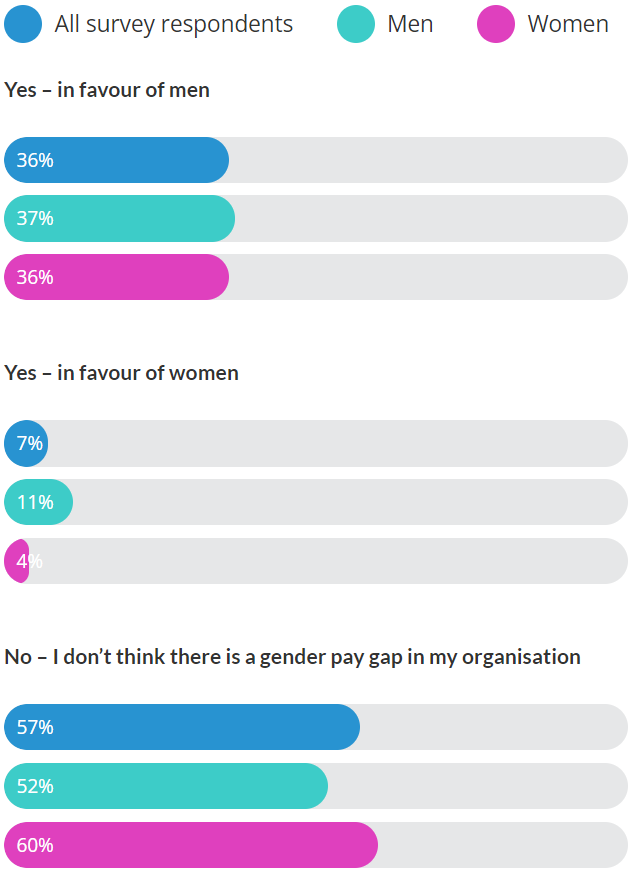 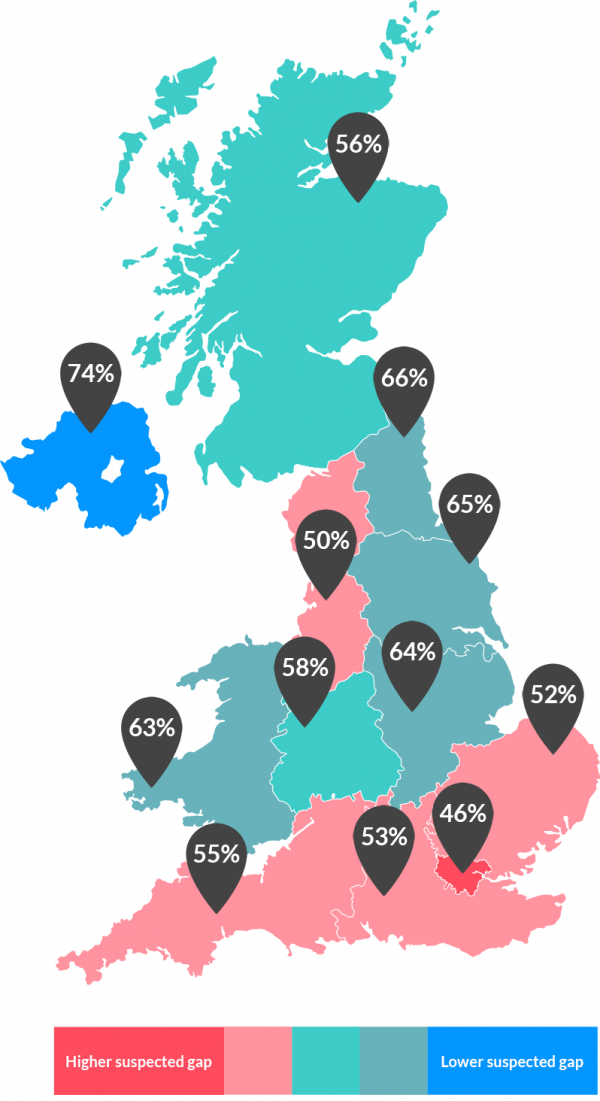 How big do you think the gender pay gap – in favour of men, is in your company / organisation?

Industries and professions reporting the highest average gender pay gap figures – in favour of men, are IT & software, transportation and warehousing, and construction. With survey respondents estimating that their employers pay their male employees well over a third more than their female employees (41%, 38% and 38% respectively).

The average across all answers is 31% and the median is 21%. 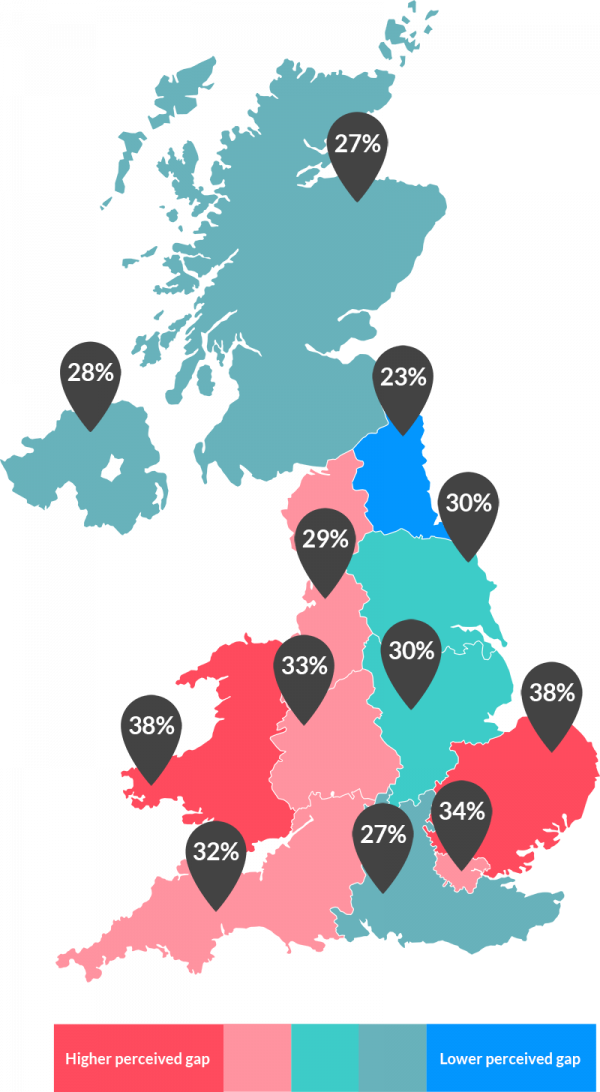 Do you think gender pay gap reporting should be mandatory for all companies / organisations regardless of size (including those with under 250 employees)?

Do you think ethnicity pay gap reporting should be mandatory for all companies / organisations regardless of their size?

Have you ever researched / looked up the gender pay gap of your current or previous employer? 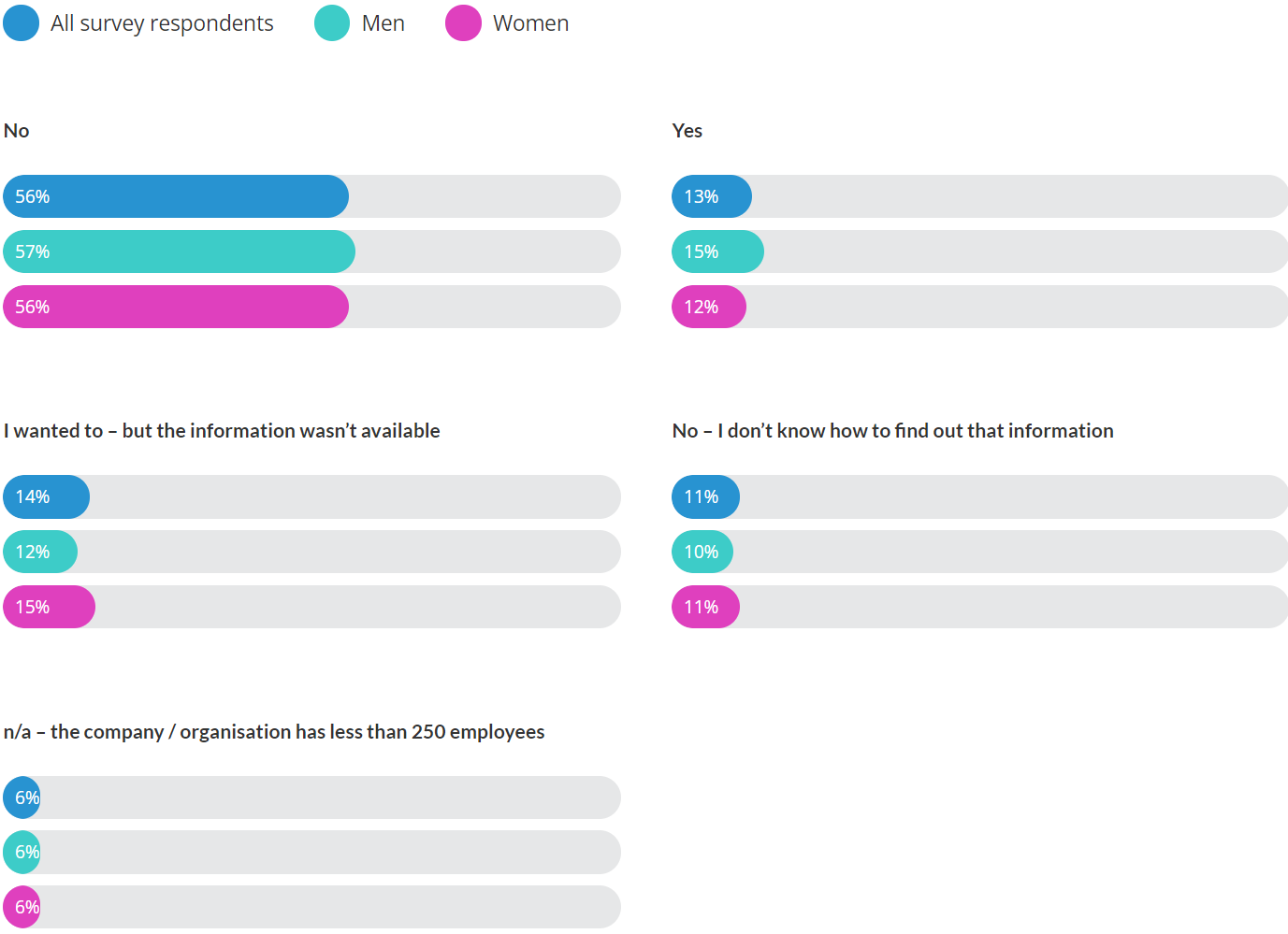 If the information was available, would you take an employer’s gender pay gap into consideration when job hunting?

Over half of women (58%) say that they wouldn’t apply for a job with an employer that has a gender pay gap, compared to just under two-fifths of men (38%). 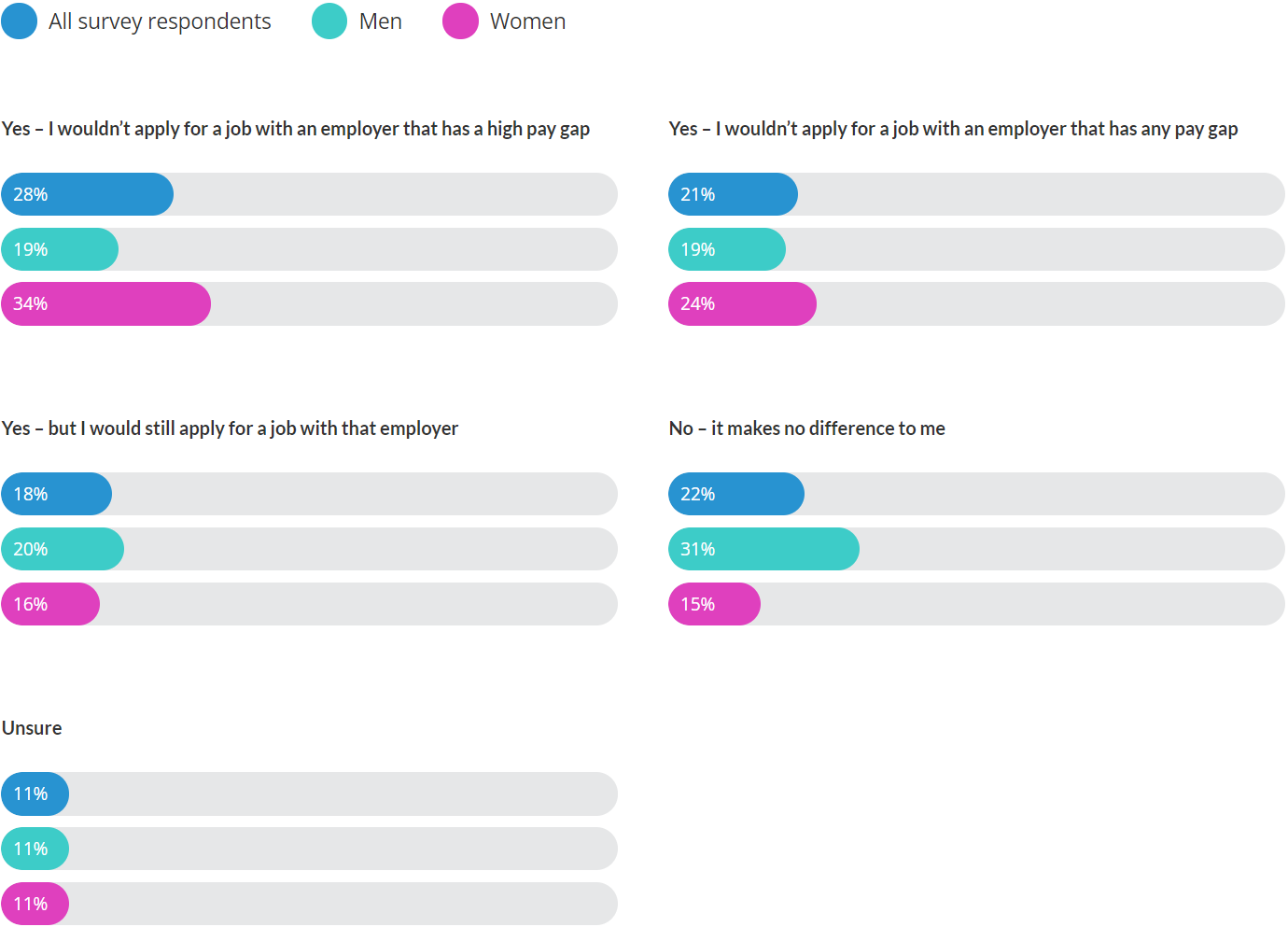 If the information was available, would you take an employer’s ethnicity pay gap into consideration when job hunting?

Nearly half of all workers (47%) and over half of workers from ethnic minority backgrounds (52%) say that they wouldn’t apply for a job with an employer that has an ethnicity pay gap.

Women are more likely to be averse to working for an organisation that has an ethnicity pay gap compared to men (54% and 37% respectively). For black women that figure rises to 57%, and for Asian women it’s 71%. 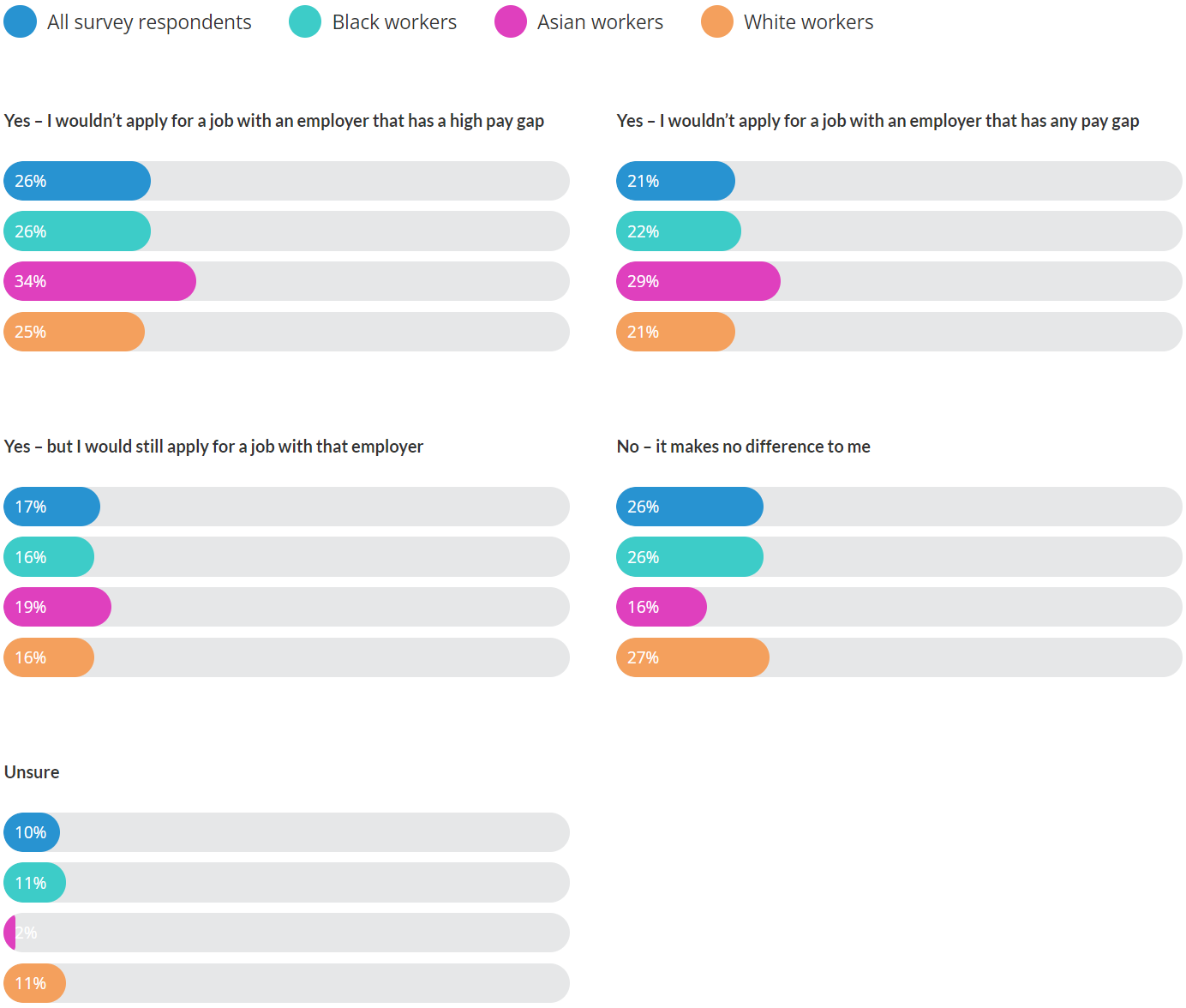 Are you allowed to talk openly about your wages at work (if you want to)?

More than one-third of workers (37%) say they are actively discouraged from talking about their salaries with their colleagues and co-workers, despite them having the legal right to do so. While one in twenty people (5%) say they are actually banned from doing so, due to pay secrecy clauses in their contracts.

Most workers (56%), however, report that their employer (rightly) allows and encourages these discussions, with a quarter of people (26%) saying that their organisation is fully transparent when it comes to salary information. 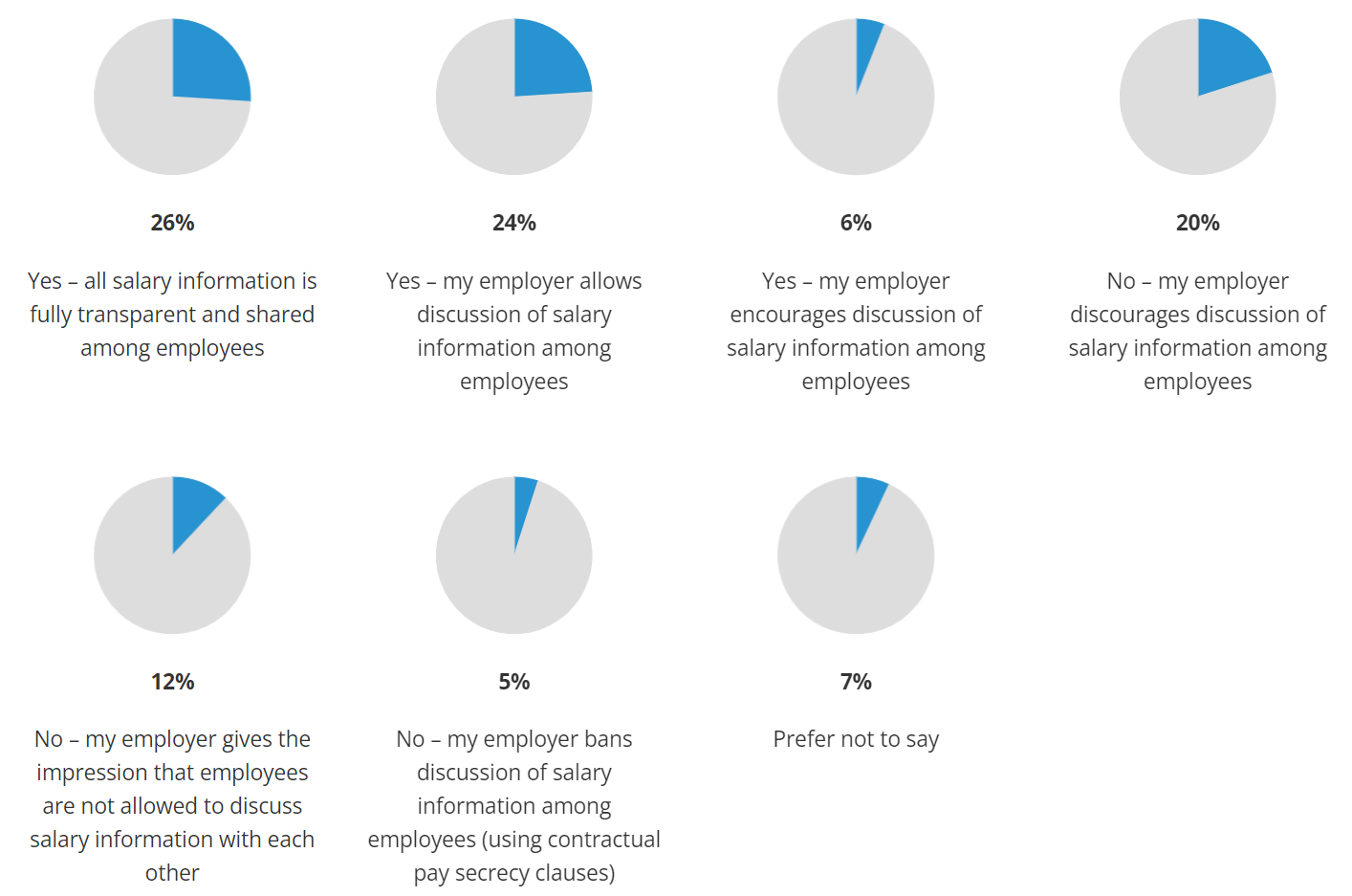 How do you feel about discussing your salary information / earnings with others – do you talk openly about your pay with any of the following people?

Over a third of people (36%) say they don’t talk about their salary with their significant other, while only two-fifths of people (40%) are happy to tell their friends or parents what they earn. Even less (20%) divulge that information to their children.

Only a third (33%) say they would tell their colleagues and co-workers what they earn, and only one in six people (16%) say they discuss their current salaries with potential new employers or recruiters.

Is the company / organisation you work for transparent about its promotion, pay and reward processes and policies?

According to guidance from the Government Equalities Office, published in 2017: ‘Introducing transparency to promotion, pay and reward processes can reduce pay inequalities’. It’s one of half a dozen effective actions that organisations are advised to take to help close the gender pay gap.

Only half of all survey respondents (51%) say that their employer is transparent about its promotion, pay and reward processes and policies. However, it does depend on who you ask.

Nearly two-thirds of senior managers (62%), such as owners, CEOs, CFOs, C-level executives, and HR managers, seem clear on their organisation’s processes and policies. Whereas only 47% of non-management staff (who make up 64% of all survey respondents) say the same. The latter are also more likely to report that they are unsure (27%) about these processes and policies, compared to 13% of bosses.

All statistics have been rounded to the nearest integer or one decimal place. Totals may not sum due to rounding.

Please confirm deletion. There is no undo!