Twitter’s one of the most popular social channels to engage and attract people, and with good reason; whether you’re using your brand’s social profile to attract more customers, build and nurture passive talent, increase your reputation as an industry expert – or all three – being visible above the rest of your competition is a challenge. 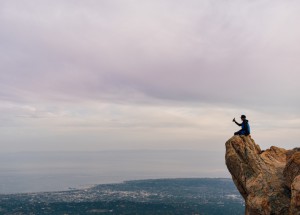 The problem is that its popularity also means that Twitter is very crowded, getting yourself heard above the noise requires something a bit more than simply tweeting your latest product update or advert.
In the UK, mobile devices are now the most popular way to access the internet, accounting for over a third of all traffic.
Social apps are among the most popular for these devices and so your potential audience for sales, recruiting and brand awareness is immense.

It’s not all about you

Only sending out tweets relating to your promotions won’t gain you an engaged following. A stream of what are essentially adverts appearing on a follower’s Twitter stream will soon earn you a steady flow of ‘unfollows’, reducing your audience, your potential talent pool and your influence.

Tweets are snippets of information that spend at most a few seconds at the top of a follower’s stream and need to be able to attract the focus and attention of that person. If they know that it’s just another tweet about a product update then they’ll not give it a second look.

Variety is the spice of life and the key to an interesting and informative Twitter account. You may have an active blog, writing really interesting articles, but you also need to tap into the infinite resource that the internet provides. This is where you’ll find articles and news that you can utilise to attract and retain a long-term following.

Let your personality shine through

Although limited, a tweet does still allow enough space for you to show that it’s written by a human being. A never ending number of boring ‘ ‘&’ ‘&’ ’ tweets aren’t inspiring, appear lazy and aren’t attention grabbing. When sharing information try to add a little bit of who you and your brand are. It doesn’t have to be a lot, just enough to illustrate that the tweets have been written by a real person and not automatically collected and shared by a bot or algorithm.

Using current news or trending topics online will allow you to link your updates to stories happening in the real world and show that there’s someone behind the tweets putting thought and effort into making them relevant.

Working at home because of the #tubestrike? Here’s how to be your most productive self! | https://t.co/HntFFhQepJ pic.twitter.com/pmHdrpymQd

Another element of a persona is having fun and not taking things too seriously. You may well have noticed that over the past few years companies have made efforts to become more like your friend rather than just a provider of goods and services. There’s a reason for this, as with people that are fun to be around and aren’t too up tight or stuffy, businesses are much more approachable and likable when they show themselves to be down to earth and ‘real’. It’s called SOCIAL media for a reason, it’s all about being social, communicating, collaborating, engaging and generally getting on with people (hopefully a LOT of people).

Imagery can be used to enhance your tweets and reflect your social persona to great effect. Twitter themselves researched the effects of including an image in your tweets, the results speak for themselves: 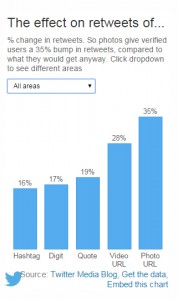 If you, as a brand, appear unapproachable or your updates look like they were written by an 18th century school master, then why would anyone want to connect with your brand?

Disclaimer: ‘Not taking yourself too seriously’ doesn’t mean that you should be unprofessional. Remember that you’re still representing a brand and think carefully before sharing anything potentially controversial.

Create a window to your brand

Increasing transparency increases trust. Allowing people to see the inner workings of your organisation shows that you have nothing (or very little) to hide. 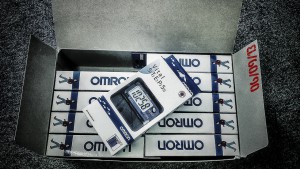 Updates about what social events you’re planning, congratulating employees or customers for their efforts and demonstrating what you have to offer as an employer, are just some examples of the type of transparency you can project as a business.
Allowing people to see inside your business and create familiarity increases a person’s understanding and, as a result, trust of your brand. If people trust you then they’ll be more likely to read your content and use your services.

Transparency in your social strategy also allows your employees to get involved in your efforts, increasing internal engagement and also aligning your brand message throughout your business. This allows you to control the messaging and ensure that it’s in line with your brand values and image. Including your workforce in your public persona also allows you to demonstrate your employer brand to potential talent.
By promoting the activities you run, the environment you provide and the relationship you have with your staff, you can build a pool of people interested in working for you.

Social networking is an ever-increasing source of talent. In a recent survey by LinkedIn it was found that 38% of quality hires were through professional social networks, but that only 61% of companies are taking advantage of the huge passive talent pool that social media provides.

A transparent approach also makes things easier, should something happen that has a negative impact on your brand. A secretive and illusive company will be given little sympathy should a mistake be made, however a business that’s always been honest and open will usually receive more leeway.

Conversation and interaction requires two-way communication. If you’re simply broadcasting information, then you’re not inviting followers views, opinions and ultimately engagement. Asking pertinent questions of your audience is a great way to strike up new relationships and advocacy within your network.

For the most part keep the questions relevant to your industry, however there’s nothing wrong with occasionally starting a Twitter chat about something more fun or topical. Enticing a response by offering an incentive is an effective strategy on Twitter. By offering something in return for an opinion you can break the barriers that may be present and make it easier to strike up conversations in the future.
The incentive could be an entry into a prize draw, a discount or a straightforward gift for responding – it doesn’t have to be much, but just enough to grab attention and inspire a reaction.

Whether you’re thanking someone for a retweet, following you or simply a mention, make sure you personalise the message. With the abundance of tools that will automatically thank people for you using an algorithm it’s unusual for a brand to take the time and make an effort to give thanks on an individual basis.
Mentioning the user by their name (not their Twitter handle if possible) is a great way to immediately engage with them and show that you’re not a bot or automated service, set up to send a generic message to users who engage with you.

Adding images or even animated GIF’s illustrating your appreciation adds an extra dimension to your gratitude and demonstrates that you’ve made an effort to show your thanks.

@AnnePestel Thanks for sharing Anne, we really appreciate it! 🙂 pic.twitter.com/Df2u1ugmuD

When messaging people, always try to vary the general message too; as well ask thanking them for a follow, ask if there’s any topics you tweet about in particular that they’re interested in. In addition to showing that you’re listening to your audience, you’re also inviting further engagement and getting valuable feedback free of charge.

As well as the type of response that you give, you also need to ensure that you’re able to respond in a timely manner too. This doesn’t mean that you need to have someone on stand-by 24 hours a day in case a question is asked, there’s a new follow or someone kindly re-shares one of your articles, but you shouldn’t assume that you don’t need to respond for days or until you have a spare 5 minutes in among your other day to day duties.

To aid with monitoring your social efforts effectively there are numerous social listening tools available. Personally I use Tweetdeck to monitor and manage our Twitter account here at CIPHR. A central hub of the information relevant to our Twitter account can be displayed on one screen, tweets can be scheduled and information scanned quickly and efficiently.

It’s important to make the management of social profiles as easy as possible, while not leaving things to chance, such as missing something or making simple processes harder than they have to be. Social media moves at such a pace that to properly manage, optimise and benefit from your efforts is a full time job (in my case beyond full time and into the evenings and weekends!).

Making use of mobile technology to monitor and react removes the restrictions of a laptop or PC and also provides the tool to be proactive during the hours when your competition may be dormant. I’ve found that Tweets sent out in the early hours often attract more engagement than those sent during the hours in which you’d expect your audience to be active. This is backed up by research carried out by Buffer on their blog.

One strategy to employ when deciding on a tweet schedule is to think of when people might be browsing the internet and social media in particular:

It’s also worth remembering that your audience won’t all be in the same time zone as you, your tweet schedule should reflect this. 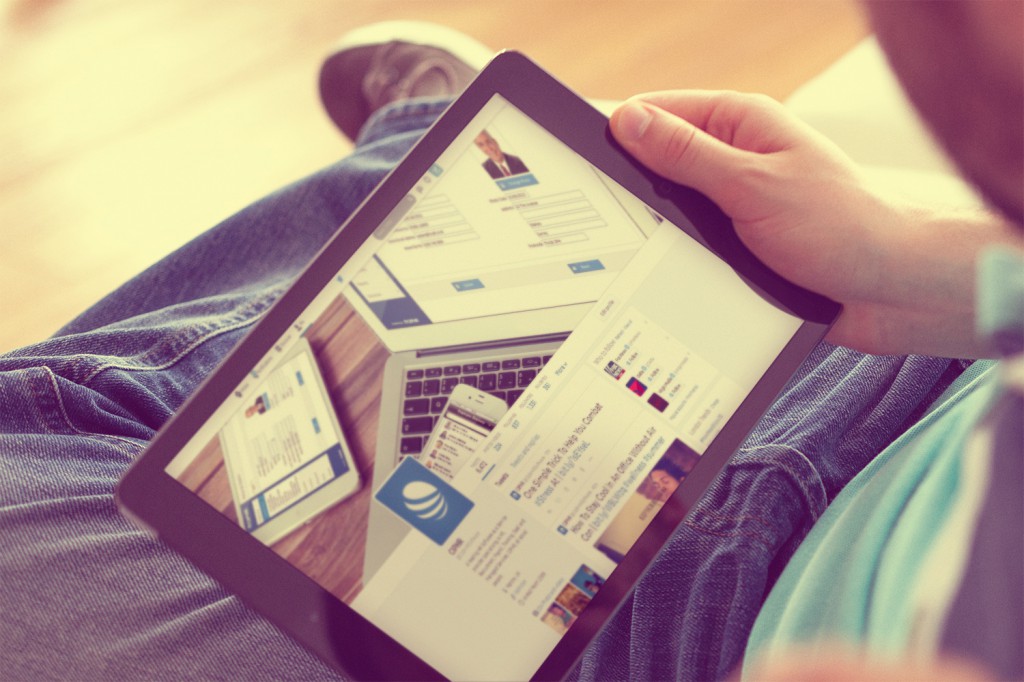 Use tools to enhance not replace

Employing the use of third party tools to enhance your tweet engagement, the quality of the information you share and when you can share it, should not be overlooked. Some really useful sites include:

There’s nothing wrong with utilising these online tools to help you with your efforts, but they shouldn’t replace what you do. Complete automation is easy to spot and can be disastrous for your brand, should the wrong tweet be sent or it stops working.

Remember to promote your social identities on and offline

It seems obvious, but promoting your social profiles should be a major part of your marketing plan. As a main communication method for your customers, a potential talent goldmine and a major sales pipeline, social media is important to your business success, increasing your profits and reducing costs.

Reducing absence (and the associated costs) should be a priority for all businesses. Capturing accurate absence data and the ability to analyse, act upon and reduce absence as a result, should...

Mental health charity chooses CIPHR for its integrated system, reporting capabilities, and helpful staff The Anna Freud National Centre for Children and Families has chosen CIPHR and its strategic partner,...

The need-to-know stats around working from home

Where is homeworking most prevalent in the UK? Take a look at our infographic to find out In today’s unique circumstances, many of us are having to work from home....